To be determined Shipping
USD $0.00 Total

HOW WE GOT TOGETHER

Assuming you already took a look at the page Behind The Brand —you already know who we are, but you might wonder how a bunch of misfits like us got together in the first place. Well, this is a very long story—but I'll do my best to shorten it.

Let's start with The IT Guy, then we'll come back to it later. For now, just know that David has always been "the weird" guy, the "geek". Francis had gone to primary school with David, and at that time he was already into computers and stuff. Francis's father even ran over David with his car one day while he was riding his bike with no brake. They did not see each other again after primary school. As for me (Alexis), I met David while in high school, and yes he was still the "nerd" of the school. I had a couple of classes along the years with David. Our relation was up and down you could say. It went from him writing flames animation codes on the table in art class, to his cousin wanting to fight me because I began to be an asshole. Then we got good again, one day he even gave me a fake Counter Strike CD, which he told me would erase any computer I'd put it in. I tried it at my friend's house one day, and it totally worked! Well, the computer never worked again, so... Then we parted ways somewhere during high school and never saw each other again. So both Francis and I knew David, at different time.

Francis and I first met while we were playing hockey—he was a goaler and I was a troublemaker. Although we knew each other by face or by reputation, we never spoke. It is not until 2009 that we really became friends—we met by the intermediary of a common friend in our drug circle. To be completely honest, we were dopeheads back then. Things stayed like that for a couple of years, we were not best friend yet, but we'd see each other from time to time. Our favorite thing to do back then was playing Call Of Duty with some green, some beers and a bag of Doritos.

Things changed in 2011 tho, as I started getting more serious about my life. During that period, I began to sell some random stuff on eBay. Francis, then came to my crib one evening, thinking we were gonna play some games like usual... But it wasn't the case, I was going hard on eBay and was not going to lose my time anymore. He could have left, but then the best thing happened: he stayed, got interested in it and started to learn about it. The last you know, we had completely swapped our stoned game nights for serious online selling sessions. We did have quite a success during our time on eBay, but we had no experience and at some point, we thought we could do anything. That's when we hit the wall. We were selling some Minions cellphones cases, and they were selling like crazy! Until, we received a cease and desist from Disney, and eventually got a life ban on eBay...

Remember The IT Guy we spoke about, David? That's where he comes into play. Now banned from eBay, with no knowledge of the Internet at all, we needed a new platform. Francis then mentioned he knew someone who could help us. When I realized who he was talking about, I knew this was the greatest idea ever. So Francis contacted David and we met with him the same night. To our pleasure, he was even "geekier" than before and was into e-commerce big time. We had found our geek guru for years to come. After that day, we went on to do several websites over the coming years. We did everything, from porn to drop shipping. We didn't hit the jackpot once, but we sure learned a lot and gained some precious experience along the way...

If you ever heard that friends don't do good business partners, we can prove that wrong. We've spent years and years working non-stop 16 hours days, 7 days a week, sharing a 12X12 office with a water heater. 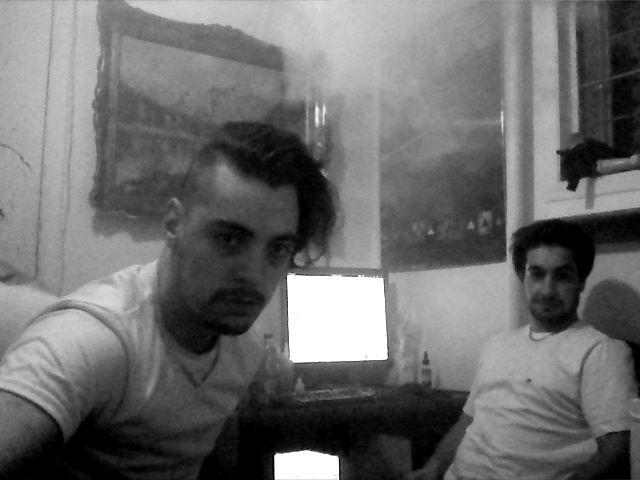 
We did absolutely everything we could to build a business... We dumped our girlfriends, stopped going-out and we ate PBNG every day (we still do).  #NOTHERETOFUCKAROUND

All these things combine, eventually lead us to open Barbaware...

Barbaware was then founded in 2015 by our young team of entrepreneurs in Quebec, Canada. Over time, we had the chance to meet incredible gentlemen with strong values. But when we looked closer at our generation—it would almost seem like that old, distinguished breed seemed to have disappeared nowadays...

With a heartfelt need to make things right, once again, for the sake of our generation, we wanted to find a way to connect with the world and share the true meaning of manhood with all men.

In some ways, we wanted to take a jab at certain beard companies, who claim that the only way to be manly is to have the biggest beard ever and that shaving is ludicrous. This is one reason why we chose the name Barbaware—because we wanted to redefine what a "beard business" was.

Now this name also comes with some negative... Because of it, people often assume that we only sell products for big beards—which couldn't be farther from the truth. For us, a beard has no defined length, it can be grown or shaved. But whatever you do with it, you still need to do something with it...

And then the last reason why we chose to name our company Barbaware Men's Grooming, was because we though it would make it obvious that we don't sell toys or gimmicks, but that we sell men's stuff.

We don't believe in the standardized definition of manhood and in the description that the society has us of what a "true man" should be or look like. We strongly feel like manhood is defined in action and that i can look different for each and every one of us. 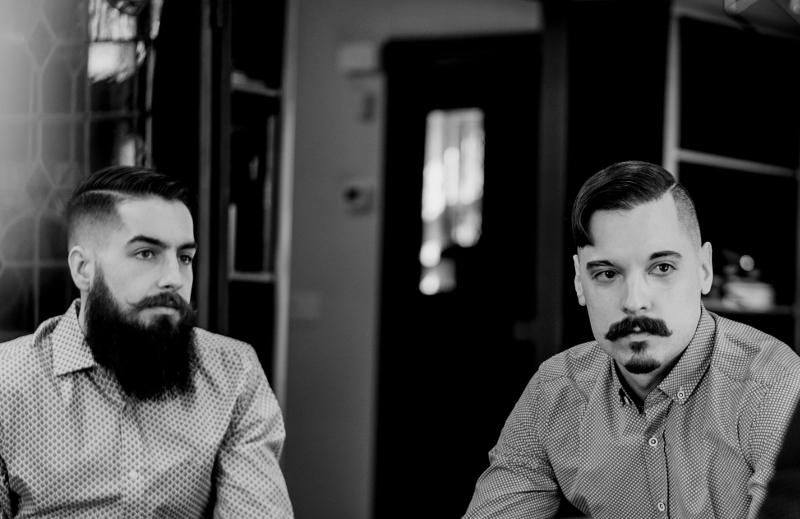 We also believe that all men have the right to take care of their appearances, without sacrificing their masculinities. We strongly believe that self-improvement starts with simple things, like a proper grooming routine. That only once you invested in yourself, can you really start to invest in making the world a better place for the people you love.

We not only focus on providing men with excellent products but also on providing the tools they need to invest in themselves. The main mission of our brand is to help men feel irresistible, confident and good about themselves. Every product we sell is carefully selected to provide quality, pleasure, and benefits.

In order to accomplish this mission, we bootstrapped the business in a few months, with a few bucks, a geek and a lot of commitment. We hustled our asses off and pieced together a store which could reflect those values.

In order to reflect these values, we do things the old-fashioned way. We purchase our inventory and respond to our customers personally. And we only sell products that we personally support.

Until recently, we only sold what we believe to be among the best brands of men's grooming products available—and never had our own line. We were not gonna rush into something without being sure of what we were doing.

Therefore, we took our time, tried hundreds of products and saw what worked and what did not. We had time to really analyze the market and see what was out there and what was missing.

BIRTH OF THE LUXURE ELIXIR

In October 2018, we finally decided it was time—we were gonna launch our very own first product! Now don't get me wrong here: all the different kinds of products available are great... But if you're like me, you like simple things. If it can be done simply, why complicate it?

To put things in perspective, I really like to take care of myself, and I go all-in.

Therefore, somewhere along the way I ended up using a couple of different products every day: a beard oil (woodsy scent), an hair oil (coconut scent), an aftershave (spicy scent), a skin moisturizer (classic cream scent) and finally a perfume (Tom Ford). See were I'm going with this?

Not only this routine was time taking, not efficient and pretty expensive—but the worst part was ending up with a mix of scents that all buried one another. So I got to thinking, it had to be a better way... 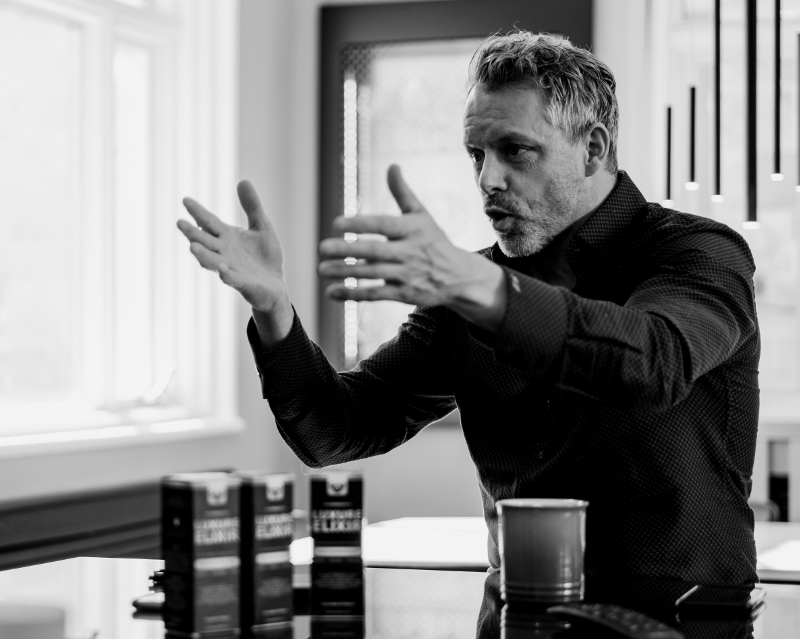 
That's when the idea for the Luxure Elixir was born! Why not have a base product that could act as all of these things? This would allow me to swap my grooming routine from 5 products to only 1, genius right?

So we got to work, a couple of months later we had our formula. We then proceeded to create a fragrance that would rival the big perfume's names, make it natural (because most perfumes are full of chemicals) and add it to our base formula.

And like they say, the rest is history... The Luxure Elixir All-In-One Nourishing Oil was born! The business had been growing very slowly since its beginning, and since the launch of our first product—things are starting to look way better. Barbers and customers of all age alike just love it. Since then we started to expend our distribution across retailers locally and are hoping to expand globally soon. 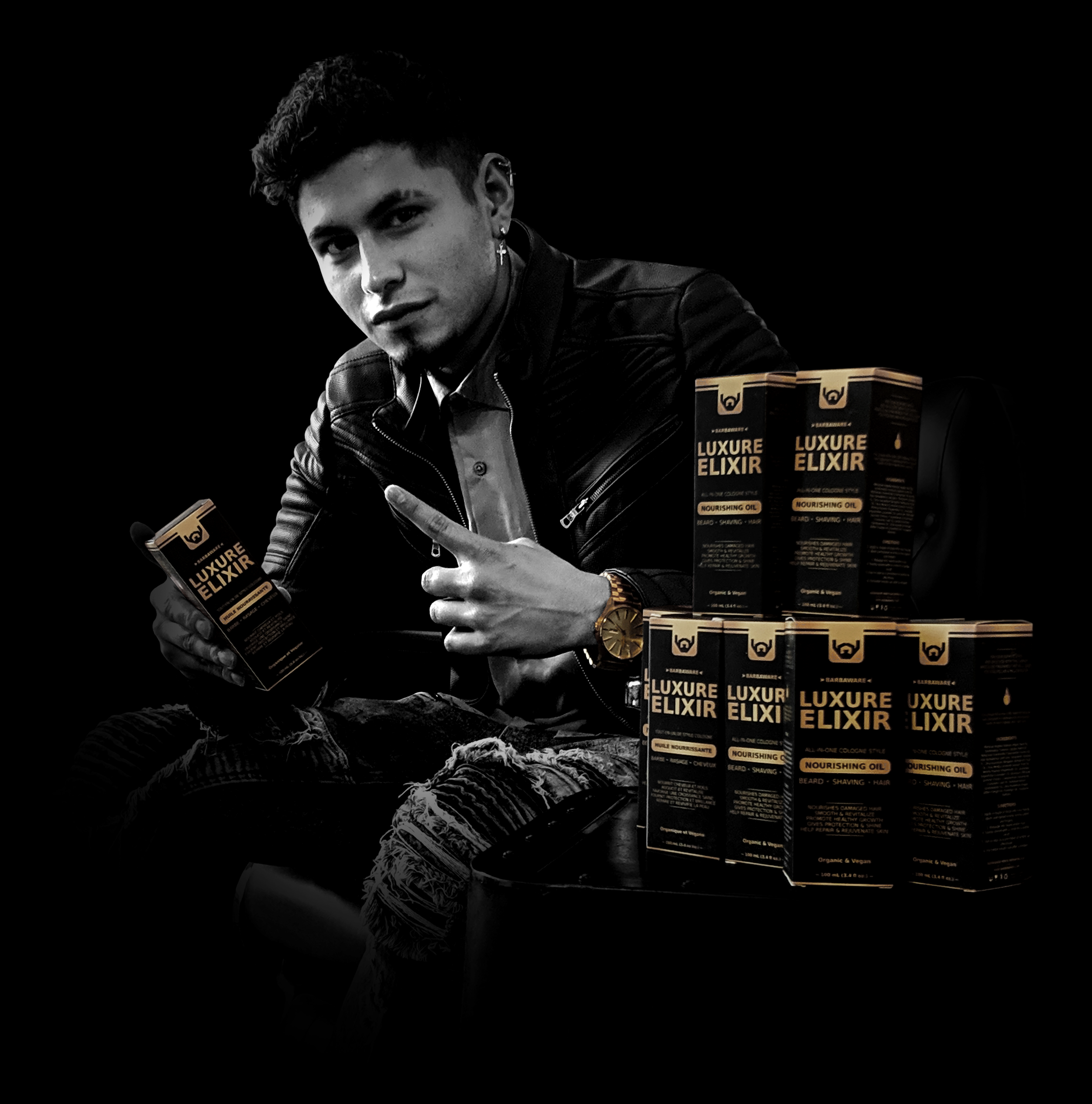 From all of us here at barbaware—from the bottom of our hearts, thank you!

By signing up, you agree to our terms of use and to receive email marketing.